How can this be called a  ‘wildfire’?  It’s like the 9/11 directed energy weapon which ‘toasted’ cars all around the Twin Towers, as described by Dr Judy Woods in her book ‘Where did the towers go?’ 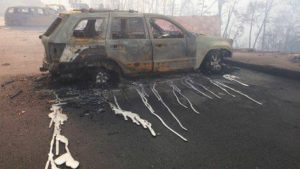 There are dozens of similar pictures on the net, showing melted aluminium flowing over tarmac, with the trees still green in the background. 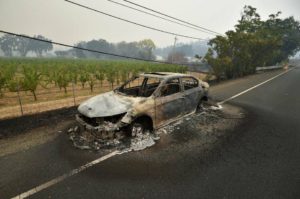 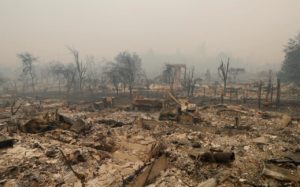 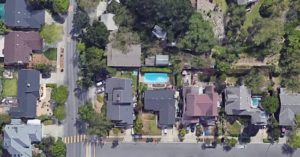 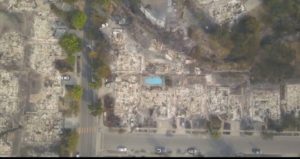 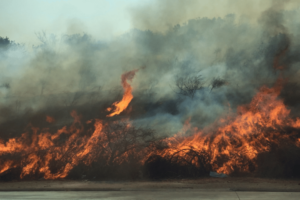 At first I was skeptical, but I went over numerous social media posts several videos, and a few messages and it appears the fires were set by an atmospheric weapon.

First to clear something up – the manner in which the cars burned was normal. But there are some instances with what went on that prove a weather weapon did this.

Weather weapons work by using multiple transmitters to create a collision zone where differently phased EM waves cancel each other out, and drop their electrical potential into the air (which is a semiconductor) where they cancel. This is the equivalent of biasing a transistor. Semiconductors won’t simply break down and start conducting just because a bias field is applied, in order for them to conduct in a controlled fashion they need a doping agent. In silicon the doping agents are arsenic and boron. In air, the doping agent is most likely whatever is in the chem trails.

If enough voltage is applied to a semiconductor, it will suddenly discharge it in one big burst. This is seen in the air as lightning. The weather/geoengineering systems try to avoid this. But this time around, in California, the effects of excess voltage were readily observed by MANY MANY people, and it manifested itself in more than one way.

Evidently the people running the geoengineering systems have become more bold, like a thief that steals more and more and more, the more the thief gets away with stealing.

The same is happening with weather warfare, and this time around in California, the effects of the system in use were easily observed.

1. Some people got heart palpitations from having their bodies charged.

2. MANY MANY people saw electrical flashes that made no thunder in perfectly clear blue sky, and worse, some people even saw small sparks everywhere in the air around them.

3. MOST DAMNING: People are reporting that their electronics malfunctioned before the fires hit, with the most pronounced and spoken about malfunction being at a hotel, where ALL of the electrical systems in the hotel malfunctioned, including the electronic access doors, forcing people to jump from windows (because they could not leave their rooms) to escape an approaching fire that instantly appeared out of nowhere in perfect weather.

It is very important to make note of the malfunctioning doors, because a simple power outage will not stop those from working. Something jammed the circuits in the doors.

Simultaneously the hotel lost main power, generator backup, UPS backup, and local battery backup. Not even the always operational emergency hall lights worked. That would be totally consistent with a massively potent EM weapon causing complete electronic malfunction because not even the circuits in the emergency backup lighting that turn it on (which operate independent of everything off of a small battery right in the light itself), not even circuits at that small level worked.

There are people trolling social media (perhaps because they don’t understand how things work, but perhaps not) and they are saying there is no way the air could have been so electrically charged that sparks would be everywhere because it would electrocute anyone standing in it. This is not true at all. Tesla proved it. There are lots of photos of Tesla sitting on a chair with an electrical storm all around him, because it does not take much to make a show (relative to what the body can take, because the body is a much better conductor than air.)

Additionally, the frequency at which the air is charged makes a big difference, once the frequency goes beyond approximately 40 khz the body won’t conduct it deeply due to an electrical effect known as the skin effect, where electrical charges travel on the outside of objects rather than through them. All the unbelievable Tesla photos were the result of super high voltage low current electricity traveling around the outside of objects due to the skin effect caused by that electricity also being at a high frequency.

So how would this start forest fires? The answer is an easy one.

1. a dry leaf is thin, which eliminates the benefit of conduction via the skin effect, and

2. A dry leaf will try to be an insulator, which will force all of the electricity that flows through it to turn itself into heat. And additionally, if the air is sparking everywhere as some witnesses said, one of those sparks would probably set off dry tinder somewhere.

POOF, instant fire, there should have been several cases of exploding dry trees where there was no fire there before at all. Lots of people are saying these fires suddenly “exploded out of nowhere” – no hint of any previous fire, no lightning, no NOTHING, just a sudden high wind happening at the same time the forest nearby suddenly burst into flames. That would be a telltale sign of a sudden massive electric field heating everything up (everything that could not conduct electricity very well, which means air and dry leaves) There are people saying space-based laser systems are doing this, (and that absolutely would work, so I “get it”,) but I still believe they are using phase cancellation of radio waves to cause a bias field, because whatever happened when a laser was used would not be easily controllable and would too easily result in the creation of massive ionosphere to ground lightning bolts. That is not happening, which is why I am sticking with the EM wave approach to this. Maybe as they get more brazen and not caring about noticeable effects, they will start using lasers, which would be a whole lot easier.

How could you possibly get 66 widely spaced massive wildfires appearing instantly with no natural weather causing them, growing rapidly, with perfectly calm weather before, sudden massive winds at the initiation of the fires, blue sparks in the air, malfunctioning electronics, and in some people heart palpitations? My answer: just ask Darpa.